Engineering Stories: Does the FLIT-16 charge as you pedal?

We’ve been attending a lot of shows recently to meet many of our backers and let them test ride our ebike.

One of the unexpected questions that I often get asked is “Does the FLIT-16 recharge itself as you ride?”

I have come to realise that there are actually two questions being asked here;

The answer to number 1) is no, it would be cool but is sadly not possible. Pesky physics to blame here. The power that the dynamo generates comes from the wheel, and the wheel is driven by the motor, but the motor receives power from the battery. So really the energy from the dynamo is just coming from the battery, and because of the losses in the dynamo, you’ll actually be draining the battery faster than if the dynamo wasn’t there at all!

For the second question;

“Can I turn the assist off and charge up the battery with my own effort?”

This is physically possible but we still don’t offer it as a feature because it doesn’t really work and in the few cases where it is promoted by ebike companies, it is essentially a marketing gimmick – we’ll come back to that later.

First of all let’s talk POWER. I came across this awesome plot from the guys at CycleAnalytics.com; 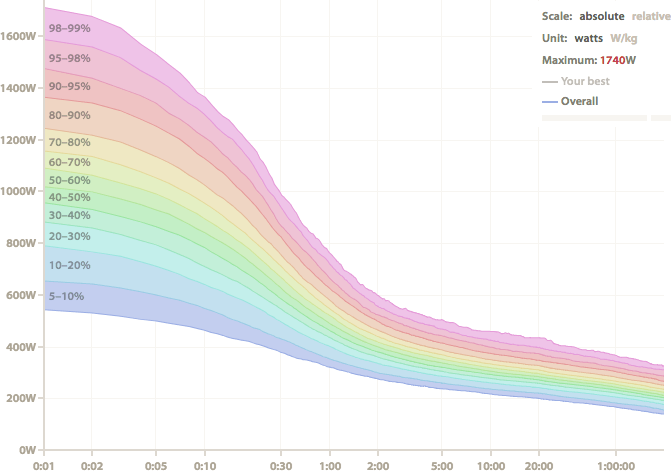 The average commuter outputs around 75W on a leisurely ride

Across the bottom of the plot we have time sustained. You can see that for durations beyond a few seconds the average power plummets. Even for pro cyclists, sustaining a power of 400W for an hour is a tough feat. Bradley Wiggins, managed an estimated average of 440W during his record breaking attempt at the prestigious one hour event.

What about us mere mortals? What kind of power do we average over a leisurely commute? Research suggests 75W is typical. At 150W you’re in the top 15%, cruising on the flats at 22kph.

Where does all that power go? At 22kph travelling on a flat surface, about 70% of that power is spent pushing air out of the way. The remainder is lost through heat in your tires and transmission.

Let’s imagine you hit a hill and your power jumps from 150W to 250W as you try to maintain a decent speed. For non-athletes, 250W will be difficult to maintain for more than 10 minutes. So the additional 100W makes a normal commute into an intense sweaty workout.

How long would you have to hold that extra 100W to charge your battery? The FLIT-16 has a 250Wh battery. Let’s assume it can be charged via the motor with an efficiency of 80%. That equates to over 3 hours for a full charge. Over 3 hours…at 250W. We’re going to need a mop and bucket!

So what if we charge at a slower rate, say 3W – that’s about the same amount of extra power that a hub dynamo draws and most people would barely notice the difference. But that means cycling without electric assist for over 100 hours before you get to enjoy the fruits of your labor.

Self-charging cars: is it all just a marketing ploy?

What sounds like a revolutionary perpetual motion machine is just more marketing mischief. The energy flowing into the battery has to come from somewhere. In this case it’s from burning fuel. Petrol contains 9.5kWh per litre. Last time I filled up my car it set me back about £1.3 per litre. Of that 9.5kWh, most of it is wasted as heat by the engine. Maybe 20% or so actually makes it into your battery. So that £1.3 has bought you 1.9kWh – 68p per kWh. That’s about 5 times the price I pay for electricity from my socket. So not even cheap energy, let alone free energy.

Anyway, enough of my rambling about cars and marketing BS. The take away here is that we take for granted that we are surrounded by easy access to high power. From power sockets, cars, and even ebike motors (peak power of the FLIT-16 motor is 468W!) we have access to power that is often orders of magnitude greater that the powers sustained during human activity. So it takes a long time for a human to generate enough energy to do any of the useful things that the machines around us do with ease. Who better to demonstrate this than Olympic cyclist Robert Förstemann (barely) toasting a piece of bread;

If you have any questions please feel free to get in touch.